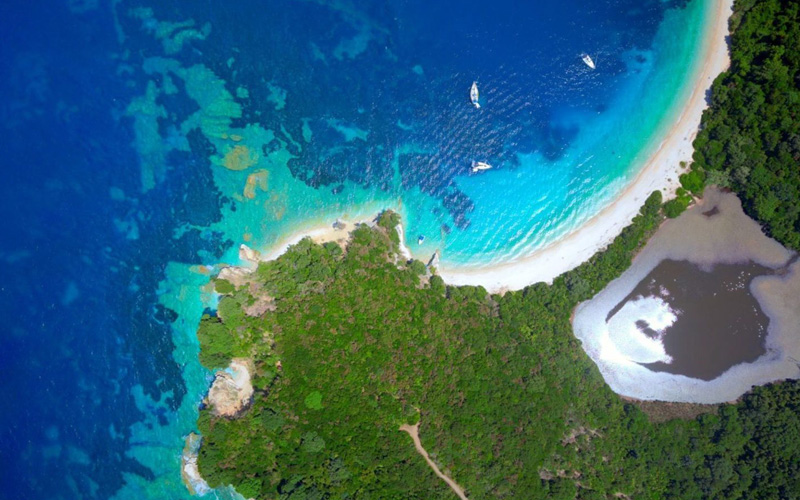 The Red Alert System is a protocol created to collectively listen and work with an NGO that needs the support of the international community to protect a Mediterranean wetland at risk. Unsustainable development (urban, tourism, agricultural and commercial) is the most common threat in the Mediterranean. Such projects usually have high economic importance, which makes it difficult for local NGOs to ask decision-makers to stop them.

Therefore, the actions pursued together with the Alliance and its internationally recognised members among others, can positively influence the choices of decision makers and save these precious area.

These are the Mediterranean wetlands concerned by the Red Alert :

Why was a red alert issued?

Located in the Erimitis peninsula on the Greek island of Corfu, these wetlands are home to a wide range of species and habitats protected under the EU Birds and Habitats Directives.

In addition to being a center of biodiversity with the probable presence of the endemic Mediterranean monk seal and the endangered otter, these wetlands play an essential role in regulating water quality, maintaining soil and resisting natural hazards.

The high ecological value of these coastal wetlands, however, is threatened by a proposed tourist resort – Kassiopi – which plans to build hotels, villas, apartment buildings and a marina in and around the wetlands of Vromolimni and Akoli. This project would have degraded not only the natural health of the Erimitis, but also the livelihoods of local residents.

How did the Red Alert support the Save Erimitis campaign?

Together with the local association, Erimitis Plous, the Mediterranean Alliance for Wetlands launched a red alert. Two letters were sent to the Greek Prime Minister expressing concern about the loss of wetlands and asking him to cancel the project. Media campaigns, both national and international, also strengthened resistance to the project. Finally, the project was delayed due to a lack of buyers for the land. Currently, the Alliance is monitoring the case, while the campaign continues.

Why was a red alert issued?

Home to millions of migratory waterbirds each year, 400-year-old pine forests, and the only Albanian breeding grounds for the endangered Dalmatian pelican, the Divjaka-Karavasta wetland became the first RAMSAR site in Albania in 1995. This area is one of the two most important wetlands in the Adriatic basin. It also includes the Divjaka Karavasta National Park (DKNP) which is the symbol of Albania’s natural heritage.

In 2017, it was threatened by the “Divjaka Resort Project“, which has been proposed for implementation within the national park. With the planned construction of 370 villas and 2350 apartments, the scale and location of the project posed serious threats to the habitats and ecological integrity of the park. It clearly violated national legislation and international protocols ratified by Albania, and attracted considerable attention.

What was the result?

With the strong action of a coalition of NGOs, the Mediterranean Alliance for Wetlands (MAW) issued a red alert and wrote a letter to the Albanian Prime Minister, demanding the cancellation of the project.  As a result, the government agreed to revoke the project. However, while monitoring the situation, the Alliance reissued a letter expressing its concern about other development projects that might encroach on the park’s boundaries. This approach ultimately yielded positive results as the boundaries were respected.

Lagoon and wetland of Vjosa-Narta : Albania

The Vjosa-Narta wetland complex is part of Albania’s network of protected areas. This Important Bird Area (IBA) and Key Biodiversity Area (KBA) is a year-round sanctuary for birds such as pelicans, herons and flamingos. It is home to up to 1.5% of the world’s population of the Dalmatian pelican, one of the world’s largest flying birds, which is currently a vulnerable species. It is also crossed by the Adriatic Flyway, which is a route for thousands of migratory birds every year.

However, this area has been chosen by the government for the construction of an international airport and solar farms. Construction work and aircraft noise are just some of the many threats to the Vjosa-Narta ecosystem, not to mention the safety risks to aircraft and people. Despite this, the Albanian government claims that it will not violate any environmental laws in its implementation.

Has a red alert been issued?

The organization has contacted the Alliance (MAW), but the red alert has not been officially requested.

Sebkhet Sejoumi is a Key Biodiversity Area (KBA), as well as an Important Bird Area (IBA). Home to more than 60 species of birds, it is an important migratory site for flamingos, whose numbers can reach 30,000 per day. But the Sebkhet Sejoumi wetland is also facing increasing demographic pressure. Activities that contribute to its degradation include intensive water extraction, grazing, fodder extraction and recreational use.

Surface water has been greatly reduced with rapid urbanization, which has washed away most of the surrounding area, as well as a fifth of the wetland itself. There is a strong need for a sustainable water and land management plan for the area, as well as wider ecological monitoring and awareness raising.

A local NGO requested the support of the Alliance to work on a red alert.

The Daya of Dar Bouazza is the last coastal wetland and the most biodiverse site in the Casablanca-Settat region of Morocco. It not only provides protection against marine flooding and water purification, but also constitutes a source of cultural, recreational and ecotourism services. However, in recent times, with increased water withdrawals and demolition work, this important ecosystem and its water resources are increasingly being privatized. Real estate projects around the site are also increasing, and may soon lead to its complete disappearance. Few measures have been taken to respond to the distress of local associations that denounce these projects.

The red alert has begun.

Why is it threatened

Doñana National Park is one of Spain’s most emblematic nature reserves. Home to millions of migratory birds and many endangered species, it is considered a UNESCO World Heritage Site and a Natura 2000 site. Its 280,000 hectares include natural beaches, dune systems and a variety of forests and scrubland.

But this land also has a history of overexploitation of its aquifers and other water resources. For this reason, the European Court of Justice recently held Spain responsible for its degradation, citing violation of the Water Framework and Habitats Directives. However, despite this ruling and other awareness-raising plans undertaken by WWF, the Spanish government has still decriminalized 1,460 hectares of illegal strawberries, which pose an imminent threat to the disappearance of the region’s biodiversity.

Covering more than 150,000 hectares, the Camargue is the second largest delta in the Mediterranean region. Emblematic of France’s rich natural heritage, it is home to a plethora of species – 75 fish, 15 amphibians, 6 reptiles, 32 mammals and 412 bird species. Many breeding and migratory birds, such as the pink flamingo, the ring-necked Pratincole, the Gadwall and the Ring-necked Plover, take advantage of this deltaic region of the Rhône.

Recently, however, the Camargue has been threatened by a project to build a 26 km long motorway bypass. Crossing the Camargue, this bypass will endanger 900 ha of agricultural and wetland areas. It will also cross the Rhone, disrupting its delicate aquatic and terrestrial biodiversity.

Local authorities have argued that the bypass will provide connectivity to isolated areas and reduce traffic congestion. However, environmental groups fear that the route, which would already jeopardize wetlands and Natura 2000 sites, would pave the way for other development projects in the area.

Why is this project threatened?

A red alert has been requested and is currently being examined.

The mouth of the Moulouya : Morocco

Classified as a National Site of Biological and Ecological Interest (SIBE), the Moulouya river mouth site includes the estuary of the largest river in the Mediterranean watershed of the Maghreb and the longest wadi in Morocco. Its vast alluvial forests of Tamari make it an important transit and resting area for species migrating between the north and south of the Mediterranean.

Its habitats store floodwaters and maintain groundwater salinity. The richness of its biodiversity adds to its ecological value, with more than 201 species of birds, including the marbled teal and the fish eagle, more than 127 species of fauna in the aquatic biodiversity, and more than 131 taxa of flora identified. With a high rate of endemism, it is also home to rare and vulnerable species such as the skink of Chafarinas.

Although it is the best preserved Mediterranean estuarine system in Morocco, hydrographic manipulation by hydraulic infrastructure projects has endangered the Moulouya and its immense ecological value. With the installation of new pumping stations for irrigation and the approval of four new dams, the Moulouya is facing extreme population pressure. As a result, for the first time in history, the river has been cut off from the sea, separated by a sandbank. Believing this to be an ecological disaster, local organizations have repeatedly tried to alert public opinion, and have mobilized to persuade decision-makers to recognize the potential damage and change their plans.